The Siloam Stage Road and an Unbuilt Railroad 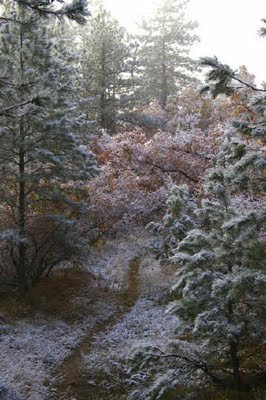 What we call "the old road" runs from our house to the national forest boundary. As far as I can tell, it is a piece of the 1870s Siloam Stage Road, which connected Pueblo with the Wet Mountain Valley before a new wagon road was built, more or less where Colorado 96 now goes.

(That is to say, Colorado 96 before the construction of Pueblo Dam, early 1970s, and the Jackson Hill realignment, late 1980s.)

This photo was taken this morning before the sun burned through to start melting yesterday's little snow.

But apparently, in some alternative steampunk universe, I can catch the train coming up from Pueblo and travel to the San Luis Valley, before transferring to a light-rail car to zip from Alamosa to Saguache, for instance.

One hundred years ago, the Wet Mountain Tribune reported,

Incorporation papers have been filed with the secretary of state for an $8,000,000 company which is to build a railroad from Pueblo across the Sangre de Christo mountains and down into Costilla County where an interurban electric system will be established connecting all the towns in the San Luis Valley. According to the plans, a line will be run from Pueblo southwest into the Wet Mountain Valley. Thence it will run southwest into Huerfano County until it reaches the Sangre de Christo range. It will cross the range into Saguache or Costilla counties at a point not yet decided and then proceed to Alamosa, Monte Vista or Del Norte. The electric railway system spreading up and down the San Luis Valley will run spur tracks into the mining regions, the timber areas, the agricultural districts and the quarries.

Yeah, what happened to that?
Posted by Chas S. Clifton at 9:20 AM