Why We Go to South Dakota 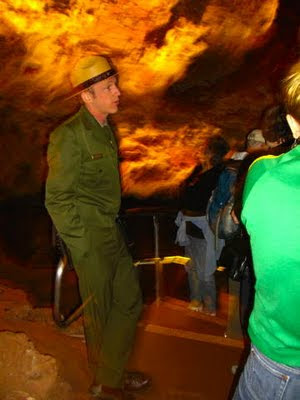 It happened several time that when M. and I told friends we were going to South Dakota, the response was, "Why South Dakota?

Despite the fact that the state tourist authority runs regular ads in the Denver Post Sunday travel section advertising the Black Hills, you do not see many green-and-white Colorado license plates here. Lots of Midwestern plates instead: Minnesota, Wisconsin, Nebraska, Iowa, etc.

Bird-hunters may come for pheasant, etc., in the prairie counties, but the Black Hills don't draw us Coloradans.

Yes, the eastern Black Hills are one of the most touristy and billboarded places you will see. When I was a kid, one of my regular playmates was the son of the manager of Reptile Gardens, a private zoo that put up more huge signs than any Black Hills "tourist trap," including Bear County USA, the Big Thunder gold mine, the Circle B Chuckwagon, and all the many others. We thought it was all normal at the time.

One the other hand, Wind Cave National Park (28,295 acres) and the adjacent Custer State Park (71,000 acres) make up a mini-Yellowstone.

What they lack in geothermal features and grizzly bears, they make up in underground stuff, in the case of Wind Cave, where interpretive ranger Garrett Roke describes 133 miles of explored passages underlying a square mile of surface area—incredibly complex, in other words. Exploration began in the 1880s with candles and balls of string and has not finished yet.

Although the local Indian hunters probably knew about the cave's natural opening (still there), which only a small adult could wiggle through, they apparently made little or no use of it. No Chauvet-style cave paintings.

And down the road is Jewel Cave National Monument, with less surface area but even more miles underground. More on it later.

Wind Cave NP and Custer State Park together preserve a good chunk of edge habitat, where the prairie meets the hills, where your hiking plan may have to include a big bull buffalo snoozing in the middle of the traill

While my fondness for the Black Hills starts with having spent eight years there as a kid, I have good reasons for going back now and again.

Some more photo posts will be forthcoming.
Posted by Chas S. Clifton at 8:11 PM