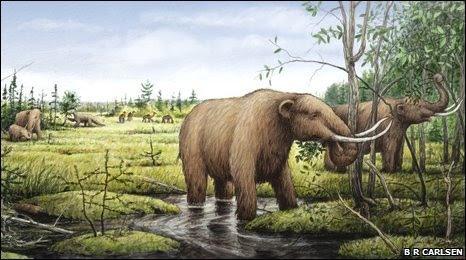 A study of pollen in mammoth and other megafaunal dung offers more evidence for the climate-versus-overkill debate.

Frankly, I wonder why anyone is talking about asteroids at this point. Was that the reporter's confusion?

"Overkill" refers to the theory that the arrival of humans—in this case, in North America—led to a fairly rapid extinction of big, slow animals.

Some similar happened in Polynesia, the Caribbean, and elsewhere, as documented in Paul Martin's Twilight of the Mammoths: Ice Age Extinctions and the Rewilding of America.

The place to see lots of mammoth skeletons and reconstructions is here.
Posted by Chas S. Clifton at 3:47 PM

There WAS a strike in NE Canada-- but I agree that Overkill is the more plausible theory. Maybe just local effects?