Fayhee on Destroying Other People's Cairns 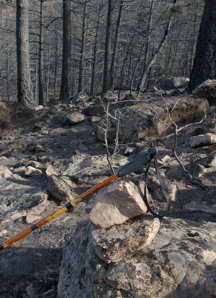 Mountain Gazette editor M. John Fayhee on the benefits of going off-route, getting lost, and not marking your path.


Then, one day, I saw some orange peels, eggshells and a candy bar wrapper next to one of the glacial tarns. And I lashed out: I destroyed every single one of those goddamned cairns. I mean to say, I obliterated the motherfuckers. This was no subtle carnage. I made no effort to aesthetically replace the rocks used to construct those cairns to their natural environment. As I kicked those cairns, I cursed the people who had built them.

With regards to Pilgrim Gulch, I was likely too late. I ought to have disassembled the very first cairns I saw. I vowed then and there to never again make such a mistake.

And thus began what to this day remains a love/hate relationship with cairns and all they represent, both literally and figuratively.

Is this where I admit to building an occasional cairn—never more than two or three rocks stacked—the way I learned in Boy Scouts? There is one in the photo, two rocks stacked on a boulder, that used to guide me to Camera Trap Spring before the forest fire made everything visible.
Posted by Chas S. Clifton at 2:08 PM

Email ThisBlogThis!Share to TwitterShare to FacebookShare to Pinterest
Labels: hiking

In Asia, local folks blaze the trail by hacking a big slash on a tree trunk. Pretty ugly in and worse than cairns in my opinion. But then I haven't encountered a whole regiment of cairns yet.

I know some sort of vague, unmaintained Forest Service trails that I have been tempted to re-blaze with the old-style short-long ax blaze (like an upside-down exclamation mark). It will look like a 1940s ranger passed through. ;)