The Earth Is Trying to Kill You, Cabela's Is Sold, Trees Talk 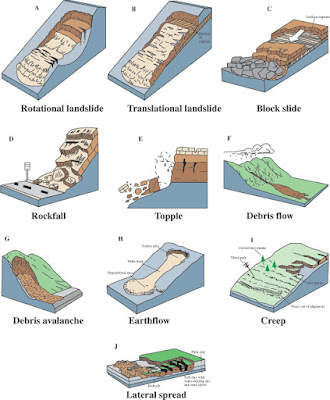 ¶ "Landslides in the United States cause approximately $3.5 billion (year 2001 dollars) in damage, and kill between 25 and 50 people annually." I think we need a cartoon character: Rocky Bear. "Only You Can Prevent Landslides." Sort of.


The deal marks a dramatic expansion of the outdoor retailing empire controlled by Bass Pro Shops CEO Johnny Morris, who founded the company in 1972. The billionaire will lead the newly combined entity as CEO and will retain majority ownership.

¶ Foresters ponder how trees talk to each other:


The main reason humans cannot perceive how clever and complex they are is because we exist in such short time scales by comparison. There's a tree in Sweden for instance, a spruce, that is more than 9,500 years old. That's 115 times longer than the average human lifespan.

Landslides--I rewatched youtube vids of the massive landslide at Grand Mesa near Collbran a couple of years ago. The scale of destruction is mindblowing, several square miles in size. Glad I wasn't there!

Bass Pro Shops--there is or was a chain of liquor stores in Bass Pro's hometown. Bass Pro supposedly got its start when one of the brothers of the family that ran the liquor stores (Brown Derby) put a shelf or two of plastic worms and such up for sale in the stores. Go figure.