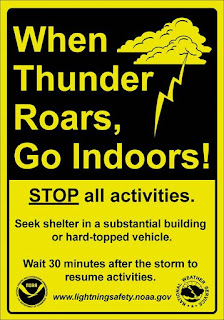 When I was a college student working a summer construction job in Taos, New Mexico, there was an old man next door, Eloy M., who people in the areas said had been struck by lightning.

They said that that was why he was shy, kind of reclusive — he worked his corn field, but never seemed to go anywhere.

Was it the lightning that changed him? According to this article in Arts Technica,


The changes in personality and mood that survivors experience, sometimes with severe bouts of depression as well, can strain families and marriages, sometimes to breaking point. Cooper likes to use the analogy that lightning rewires the brain in much the same way that an electrical shock can scramble a computer—the exterior appears unharmed, but the software within that controls its functioning is damaged.

Some quick Internet research turned up differing answers as to which U.S. states have the most lightning strikes.

Some say Florida is number one; others say Texas. New Mexico makes the top ten.
Posted by Chas S. Clifton at 7:50 PM

I have been in two cars that have been hit by lightning. One while stopped at a light in Texas, another while driving on I25 just outside of Pueblo. The first time nothing seemed to happen except it was the brightest whitest light I have ever seen and the hair on my arms stood up. The next day I turned a corner and my front tire went out...both front tires had steel belting exposed from where the lightning exited.
The second time the lights inside the car slowly dimmed as it rolled to a stop. $8000 worth of electrical damage on a car I had owned for ten days.
I've also had the phone/light pole hit by lightning while I was on the landline phone (in Texas talking to Colorado) and it knocked the phone out of my hand. No damage to my phone but blew out my router which was also on the same wall.
I have a very healthy respect for lightning.