The Walls of the Old Ones — Old Cowboys, That Is 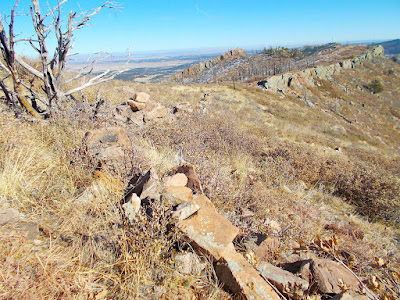 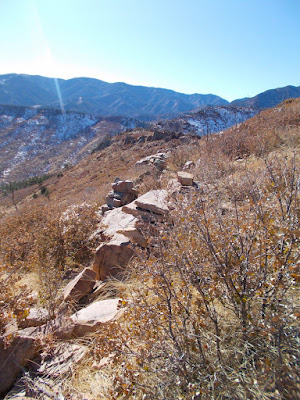 Not too far from where I live, a steep ridge crowned with rimrock separates two drainages.  On the right hand side (upper photo) or left side (lower photo) was ranch land controlled by famous cattleman Charles Goodnight in the 1870s.

At some point, someone — more likely, several someones — rode up there  (it's easier from the other side than the Goodnight side) and stacked slabs of the native sandstone to make drift fences where there were breaks in the rimrock. Evidently, they did not want cattle drifting from one side over to the other.

For a variety of reasons, I think this was done in the early-to-mid-twentieth century, not in Goodnight's day. A generation after him, in the 1890s, the whole area was being logged — but by the 1950s it was grazing land again, thanks to a Forest Service grazing lease.

As is typical all over the West, there were drastic changes from one generation to the next. No one figured out a life that was truly sustainable.

Maybe this needs a longer blog post, so I can tell the tale of Sheriff Thomas Porter of White County, Illinois, who tracked an escaped murderer all the way here and arrested him by clever subterfuge. Stay tuned.

Meanwhile, the rock walls — never really finished — remain. There are others lower down. Think of someone grunting with the effort . . . slipping around in smooth-soled cowboy boots — maybe he just ran out of suitable stones that he could lift.
Posted by Chas S. Clifton at 7:15 PM