What Would a Mountain Lion Eat for Thanksgiving?

Deer, you say? That might be a good answer, insofar as a common formula is that an adult must eat a deer-size animal every week to ten days. But down on the Rio Grande north of Albuquerque, researchers at the Pueblo of Santa Ana Department of Natural Resources collared and tracked one male who specialized in badgers.

And here I thought badgers were difficult game for any predator, given their ferocity and ability to dig in.

The lion they called Brokenleg (because of a visible old fractured that had healed and calcified) was monitored for 15 months. Here is what he killed for food: 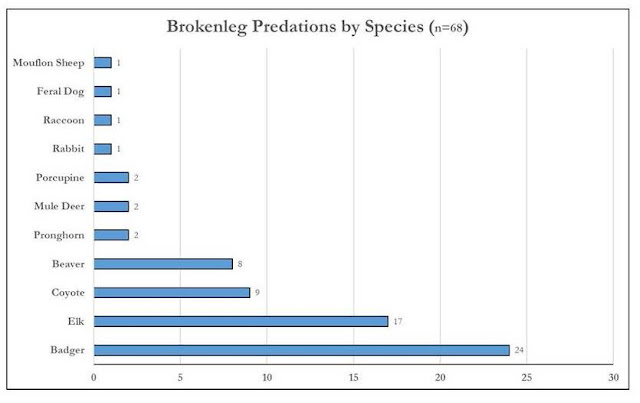 Brokenleg was one of six lions that the pueblo's Department of Natural Resources collared and tracked. On their Facebook page, they wrote,


We recently posted a graph of Brokenleg's kills that generated a lot of great questions and responses. This graph might do the same and is intended to show the varied diet of 5 lions (3 males and 2 females) that we GPS-collared and followed over variable time spans. The 3 males (months collared in parenthesis) are Big Tom (6), Brokenleg (17), and Lefty (15). The 2 females are Notch (12) and Little Girl (16). We documented 155 kills across 20 species, which are color-coded for individual lions. While Brokenleg's dataset is mostly complete, there are gaps in the other lion datasets because we did not have permission to enter onto some lands to verify kills. Despite not having a complete dataset for all lion kills, the graph clearly illustrates the varied diet of the 5 individual lions. Furthermore, we believe that Big Tom and Notch probably killed at least 15 more feral horses based on kill locations and amount of time at kill site, but because we didn't have permission to verify the kills, we can't confirm this. This is an ongoing project, so we expect we will add some species to the list in the future. (October 14, 2019) 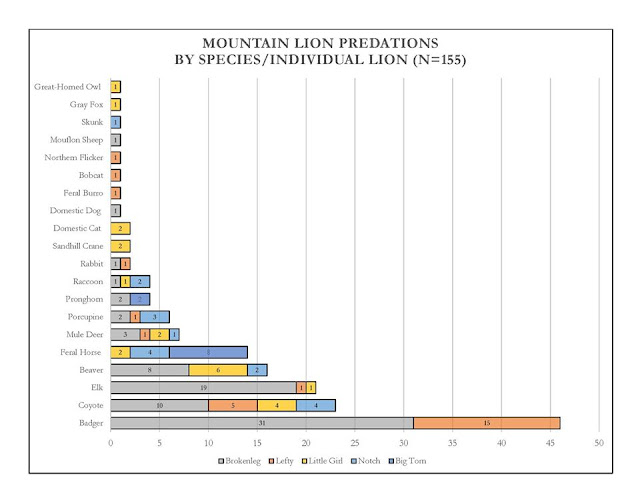 The pueblo controls 73,000 acres, and I have always been told that a lion in the Rockies hunts  territory of 70–100 square miles (640 ac. per square mile). But since mountain lions do not care about human boundaries, obviously a number of them hunt partly on and partly off the pueblo lands. And it is risky to be a badger, a coyote, or a feral horse along the Rio Grande.
Posted by Chas S. Clifton at 2:03 PM

Glad to see they're killing feral horses, wish they'd eat nothing but.