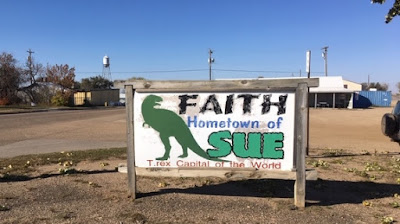 It was big news in paleontology circles in the 1990s when private fossil hunters in western South Dakota unearthed an outstanding Tyrannosaurus rex skeleton that was given the name of Sue, after  discoverer Sue Hendrikson.

A lengthy custody battle ensued (hah), with an FBI raid and a state-private-tribal-federal kerfuffle, since the site where Sue was found was managed by the Department of the Interior in trust for the Sioux nation. Ultimately, the private fossil hunters lost, and the skeleton was auctioned by Sotheby's and bought by the Field Museum in Chicago for $7.6 million.

So Sue is in Chicago and now quite famous, but in Faith, South Dakota, the little town nearest the site, she is also created in a very fine and sort of steampunk-ish sculpture by South Dakota sculptor John Lopez (here is his studio website with other examples).

Color me impressed. Interior Secretary Ken Salazar has announced a settlement of the long-standing lawsuit against the federal government for mishandling Indian trust accounts.

Spearheaded by Blackfeet banker Elouise Cobell, the suit has dragged on for 13 years.

As a girl growing up on the Blackfeet Indian Reservation, Cobell learned the government was supposed to pay out money to the owners of the private lands held in trust for American Indians since 1887 and managed by the Department of the Interior. But she noticed government checks for farming, grazing and timber-cutting on her family's land sometimes arrived, but often didn't.

She recognized many of the problems with the government accounting of the Indian trust accounts when she served as treasurer of the Blackfeet Nation for 13 years.

The Clinton administration never settled, nor did that of George W. Bush. Commenters on the Indian Country Web site, however, offer additional perspectives.

¶ The Pueblo Chieftain interviews Ken Salazar, who seems to have hit the ground running at Interior.

¶ I have been reading about the current Australian bushfires in Victoria state with more than the usual fascination and emailing friends there with questions about forest composition, fire weather, etc.

The story they tell is similar to ours: eucalpytus forests that the Aboriginals once burned have been left to grow thicker and thicker, while people built houses in them. And I have seen eucalyptus burn in California: Poof!!!

¶ In this age of Google Earth, Maptech, and other high-tech assists, Making Maps is a blog about "do-it-yourself cartography."
Posted by Chas S. Clifton at 10:40 AM No comments:

Email ThisBlogThis!Share to TwitterShare to FacebookShare to Pinterest
Labels: fire, Interior Department, maps
Older Posts Home
Subscribe to: Posts (Atom)
"The point was no longer to show one's hardihood. The point was to be there."