The Old Rifle Still Has Admirers

Because of some ongoing research of mine, I perked up a few years ago when gun blogger and writer Tamara Keel, then employed at a gun shop in Knoxville, Tenn., announced that there was an M1903 Springfield, caliber .30-06, in the shop — from an estate, as I recall — at a reasonable price.

I contacted her, made payment arrangements, and soon it arrived at a pawn shop in Florence, Colo., for the federal firearms transfer.

Unwrapped, I found it slathered in Cosmoline preservative grease, a clue to its story.

I looked at the receiver, which proclaimed "US Springfield Armory Model 1903" with serial number 954801. A little web searching revealed that that serial number was assigned in 1918.

And someone had used a knife (bayonet?) point or nail to scratch a large "AK" on both sides of the stock." A doughboy of the Great War? Arthur Kennedy? Arnold Karlson?

And it had that way-too-complicated pre-World War One rear sight, with (count them) four different sight notches or peep holes, including the "battle sight," which is calibrated to 547 yards, says the later 1939 Field Manual  (not 500, not 600).  The rear sight itself is calibrated for a maximum distance of 2,500 or 2,700 yards, depending which notch you use. That is sort of like having a car speedometer that is calibrated up to 200 mph.

But as I disassembled and cleaned the parts with gasoline (and the stock with ammonia-based oven cleaner), the rifle's origin story took a different turn. I fell down the collectors' rabbit hole.

For instance, the straight-wristed stock came before the pistol-grip stock (and the intermediate "scant" stock, which was the straight version re-cut to a semi-pistol grip). Right? Not exactly. There were seven different models of the straight stock. Collect the whole set.

What I possessed, I discovered, was a "Franken-rifle." At some time circa 1944, someone sat at a bench or by an assembly line in an American arsenal, rebuilding service rifles. A World War One-era Springfield receiver came from this bin, a World War Two-production Remington bolt from that one, a Remington magazine from another, a brand-new High-Standard barrel was threaded on, and the whole attached to a used rifle stock, bearing the initials AK. (The stock itself lacks the finger grooves common on early models, so it might be early 1940s production.)

So forget "Arnold Kennedy" of the American Expeditionary Forces of 1918. This rifle was an "arsenal mutt."

Maybe "AK" had not needed his rifle anymore. Consider this photo from the Guadacanal campaign of 1942-43. Two Marines, after the shooting has stopped in their sector, have stacked abandoned Springfield rifles on one of the island's beaches amidst other debris of war. 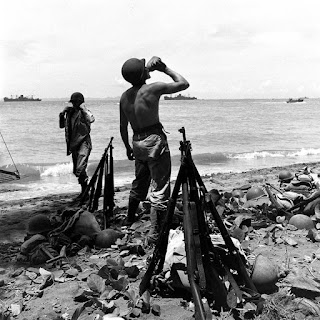 These rifles presumably would have gone somewhere for servicing; then they would have been re-issued or placed in storage. The Springfields were issued throughout WW2 to combat zone troops other than infantry — artillery crews, combat engineers, Signal Corpsmen, and the like.

My rebuilt rifle went into storage — and stayed there until it was purchased (through the Civilian Marksmanship Program?) but never unwrapped and cleaned.

I took my rifle to the my club range (maximum 200 yards) and shot it. The action was smooth as butter, and the accuracy was good if you remembered to hold low on a bull's-eye target. I considered making it a "deep woods" hunting rifle, but as sure as I did that, I would be in a situation where I needed my scoped rifle, so I never carried it afield.

Over Labor Day weekend, however, I found myself down at the Whittington Center shooting complex in New Mexico, where the rifle ranges go out to 500 meters (the high-power silhouette range), and where the target everyone wants to hit is the White Buffalo silhouette at 1,123 yards (1027 meters).

Yet there I was, surrounded by synthetic stocks and powerful scopes, but everyone wanted to try the M1903.  Dylan M., who served with the Marines in Afghanistan just a few years back, picked it up, dropped into a military kneeling pose, and would have made the shooting instructors of 1939 happy.

My old friend Galen Geer, himself a former Marine of the Vietnam era, was also shooting it. After a little while, he looked downrange at the White Buffalo, did some calculating based on my ballistics table, and selected the open battle sight, the one calibrated for 547 yards. Then he took a solid bench-rest position

Holding "six buffaloes high" and, as the song says, "a yard left for the wind," he fired. Nothing. He fired again. Nothing.

On his third shot, Dylan and I looked at each other.

"Did you hear something?"

Galen fired a fourth time. A second later came a definite "tink" from down range.

If you're not a shooter, that might not sound like a big deal, but hitting a target more than a half mile away with no optical magnification and eyes no longer young — that's something.

I think I need to go back and do it again myself — with the Springfield.
Posted by Chas S. Clifton at 10:08 PM 11 comments:

Massive 2015 Year-End Link Dump! Something for Everyone!

I too often save a link to blog about it but them am too busy to do so. So here they are! All free!

• Aspens in western Oregon could be "refugees" from Ice Age floods.

• An article on Outdoor Wire wondered if the movie Wild would give a boost to backpacking or if The Hunger Games would increase the sale of archery gear. Well, did they?

• Not sure how this turned out: a Jewish kind-of-guru and a land-use battle in the Huerfano Valley of southern Colorado.

• What is the best survival knife? I would say that it's the knife you have with you. But, gear heads, read this article.

• When I was in the 6th grade at Kullerstrand Elementary School in Wheat Ridge, Colo., my teacher, Miss Carter, became engaged to the son of a carnation-raising family. She took us on a class trip through the commercial greenhouses — there used to be operations like that all over the area. Then, boom! no more. All the cut flowers came from Colombia, thanks to the War on Drugs ("We will pay them to grow roses instead of coca.") Now, "Colorado farmers, florists seek renaissance for local flower scene."

• BoingBoing offers "The Best Adventure Stories for Kids from 1965." Is having adventures retro-cool? Elidar was actually one of Alan Garner's weaker books, I thought.

• Counting roadkill is depressing: "Our Highways' Toll on Wildlife." A game warden in Fremont County, Colo., once told me that he figured a deer or elk was killed every night of the year by a motor vehicle. No doubt some of those drivers think that hunting is cruel.

• The English discover that squirrels are tasty. Also, redheads rule.

• The Salton Sea was an accident, but birds love it. I finally saw it this past March.

• It's cold this week. Are you at risk for "the frozen five"?

• The "locavore movement" boosts deer hunting, in case you did not know.

• What southern Colorado needs is a good "guntry club." But I expect that northern Colorado will get (or has gotten) one sooner, since that is where the money is. Still, I can fantasize.

• Are you feeding the birds this winter? Some thoughts on where to put your feeders. And keep them clean.  And if you want birds, you have to tolerate some insects.

• What happens when a professional wedding photographer goes elk hunting.

• Don't make these dumb moves when you go to a gun shop.

• I have heard some of these: "Female Hunters Share Tales of Sexism."

• How to shoot down a drone. Hint: they are more like pigeons than geese.

• It kind of amazes me that Bishop's Castle is the must-see tourist attraction in the Wet Mountains. But almost everyone who rents our cabin goes there.

• When I worked at the Cañon City Daily Record, part of my job was visiting the local humane society and photographing the adoptable pet of the week. I learned some these things by trial and error, but I wish that I had had this article to read.
Posted by Chas S. Clifton at 6:36 PM No comments:

I have so many links to offer. Does anyone still click on hyperlinks? Here is a start, anyway.

• The Army is switching to "coyote brown" boots, just so you will know. "Desert tan" is just so Operation Enduring Freedom. Having the better boot color will aid the fight against Islamist terrorists.

• "Guntry clubs" — apparently this is a "thing" now, as people say on the Internet. "Savvy investors" are interested, says the Washington Post.

The average age of new target shooters is 33, while 47 percent live in urban or suburban areas, and 37 percent are female, according to the National Shooting Sports Foundation, a trade association for the firearms industry.

Me, I will stick with the Blood of Christ Shooting Sports Club.


It is a fact that bear and cougar meat are the most prominent vectors for trichinosis in North America. Pigs, which are what most people think of when they think of trich, are actually not commonly infected.

This is a link that you definitely should click.
Posted by Chas S. Clifton at 6:30 PM No comments:

• Does Boulder, Colorado, really have "the largest population of armed vegans in America"? (Via Michael Bane.)

• Have you wondered what would happen if your — or your neighbor's — store of rifle, pistol, or shotgun ammunition was consumed by fire? This professional video sets out to answer that and other similar questions, complete with slow-motion cameras and firefighters. (I had already answered that question to my own satisfaction when I was 12 or 13, and that is all that I will say about it.)

• Still geographically limited, but some work is being done on using smartphone apps to collect data on roadkill as well as live wildlife sightings.
Posted by Chas S. Clifton at 3:53 PM 1 comment:

Say Uncle links to an informative post about accidental handgun discharges, even by trained shooters—not to mention cops, who may or may not qualify as "trained."

Sometimes—under certain stresses—the body forgets what hand is doing what.

The cure is more training—creating a safer muscle memory.
Posted by Chas S. Clifton at 1:00 AM No comments:

Email ThisBlogThis!Share to TwitterShare to FacebookShare to Pinterest
Labels: shooting
Older Posts Home
Subscribe to: Posts (Atom)
"The point was no longer to show one's hardihood. The point was to be there."