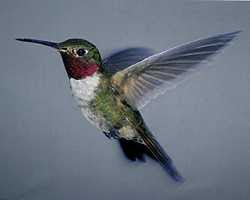 The noise of summer.

It's wartime now on our front porch. Rufous hummingbirds, migrating south, have arrived in the breeding territory of "our" broad-tailed hummers. Try typing while a lilliputian version of The Dawn Patrol is being reenacted inches above your head.


The annual struggle for control of vital airspace around the sugar-water feeder is event number four of the season.

First, in late April, season of snow and mud, comes one lone male broad-tailed hummingbird. You're outside thinking about all the storm-broken branches that need to be gathered, when you hear his rattling buzz (or "trilling whistle"). What do they eat before a single flower has bloomed and summer insects are not yet in the air? Tree sap?

Memory? The average lifespan in the wild is 1.6 years.

Then come the females, whom the males entice with thrilling U-shaped display flights. Then there are juvenals at the feeder in mid-summer, and then the war.

War ends with the departure of the rufous hummers, but the broad-tails linger, the population slowly dwindling until the last female disappears around the autumn equinox. And then summer truly is over.

When you take down the feeder to refill it, the hummers continue to fight over empty space. There is nothing there, but it's worth expending calories to defend it. Make your own parallel with human behavior.
Posted by Chas S. Clifton at 1:14 PM

I love hummingbirds. One time I left the door open on the greenhouse and a hummer went in after the goregous flowers in bloom inside. When I went out to water and spotted her I grabbed my camera and started shooting. I got some incredible photos but have no idea where they are in my office. I'm not a photographer or a bird expert but I love bird watching in my back yard. We feed the birds so we have plenty occupying the numerous bird houses Vince has built for them. I've planted flowers to attract hummingbirds and butterflies and just wait every spring knowing they will arrive.

I hope to take more bird photos and set up a collection along with my flower photos.