The Learning Curve of Squirrels 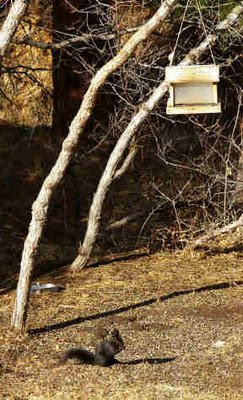 M. and I have lived here for 17 years, and we have had bird feeders up all of that time.

During those years, fox squirrels regularly pillaged the feeders for sunflower seeds. Abert's squirrels, although they live all around us, never visited the feeders (that we knew of).

As the Division of Wildlife's squirrel page notes,

Fox squirrels eat fruit, nuts and buds, and bury nuts for winter (and because they are forgetful, they plant a lot of trees). Abert’s squirrel does not hoard food, but eats whatever part of its host tree, ponderosa pine, is available in season: cones and inner bark of twigs.

So it was until this week, when one Abert's squirrel has discovered sunflower seeds. When I took the photo, it had just climbed out of the feeder and descended to the ground to feast on spilled seeds.

Has this one parted with the hallowed traditions of its tribe?
Posted by Chas S. Clifton at 10:51 AM

The aberts squirrels in my area (Pine, CO) will eat seed that has spilled on the ground under the feeders, but are seen most often in the trees. I've seen them eating doug fir cones as well as ponderosa. Perhaps the diet is more varied than thought or the aberts have occasional cravings for other foods.

Is our squirrels learning?