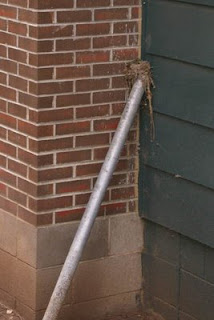 The Cornell Laboratory of Ornithology has a funky-nest photo/writing contest going.


Be creative! Take a photo, create some artwork, shoot video, write a story or a poem, or create a sculpture. Just show a bird’s nest built in some out-of-the-way or out-of-this-world place.

If I knew that I could win valuable prizes, I would take a better picture than this one, which originally appeared in this blog on July 5, 2008.

It is a Cordilleran flycatcher's nest on a piece of pipe that I left leaning against the chimney.

Amazingly, no fox walked by, reared up, and snatched the birds — the chicks fledged successfully.

After that episode, I built them a permanent nesting ledge higher up, which they do use — some years.
Posted by Chas S. Clifton at 3:00 PM