Things you learn. Not being a paleontologist or a geologist, I did not know that that the K-Pg boundary — Cretaceous-Paleogene boundary — is visible at a southern Colorado state park. (It used to be the K-T boundary [Creataceous-Tertiary], but the kool kidz have changed the name, and if you don't keep up, you're just so 1990s.)


Today, the layer of debris, ash, and soot deposited by the asteroid strike is preserved in the Earth’s sediment as a stripe of black about the thickness of a notebook. This is called the KT boundary, because it marks the dividing line between the Cretaceous period and the Tertiary period. (The Tertiary has been redefined as the Paleogene, but the term “KT” persists.) Mysteries abound above and below the KT layer. In the late Cretaceous, widespread volcanoes spewed vast quantities of gas and dust into the atmosphere, and the air contained far higher levels of carbon dioxide than the air that we breathe now. The climate was tropical, and the planet was perhaps entirely free of ice. 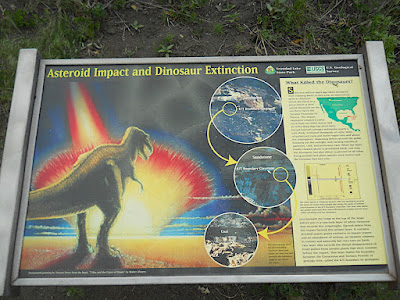 You stand there, and you look at it, and you think, "Right there. Death and chaos like we cannot imagine."


His X-Acto knife unearthed the edge of a fossilized fin. Another paddlefish came to light; it later proved to be nearly six feet long. DePalma probed the sediment around it, to gauge its position and how best to extract it. As more of it was exposed, we could clearly see that the fish’s two-foot-long snout had broken when it was forced—probably by the flood’s surge—against the branches of a submerged araucaria tree. He noted that every fish he’d found in the site had died with its mouth open, which may indicate that the fish had been gasping as they suffocated in the sediment-laden water.


This site is on the Long's Canyon Trail at Trinidad Lake State Park. It is just a quarter mile or so from the trailhead.
Posted by Chas S. Clifton at 6:19 PM

IIRC the book Roadside Geology of Colorado mentions where the KT boundary can be seen in the state. Good book.

I have -- or had -- that book, but it was an older edition. Maybe it's time to upgrade.