Wildflowers in a Scrambled Spring

This spring has been unusually cool and wet. The "wet" means that all of Colorado is now officially out of drought. I kept thinking locally that the soil moisture was still not what it could be—I was not seeing the spring melt trickles in the little draws—but the last May snowstorm produced some, so hurray for that.

The early wildflowers (spring beauties, pasqueflower) were nothing much, but these penstemons came on strong. M. and I were in south central Texas in April when the bluebonnets (which are lupines) were blossoming—the slope behind the house is almost like that.
These hairy clematis (I say Clem-atis, you say Cle-mat-is) usually bloom by late May; this year there are just getting going now. Ditto the wallflowers, not pictured. 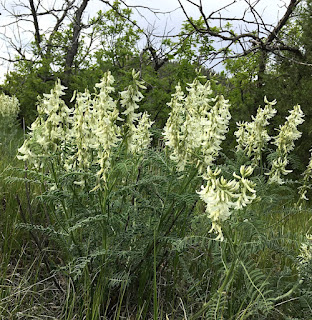 Rocky Mountain locoweed, Oxytropis sericea. They are blooming in full force too. On the other hand, the apple trees in the neighborhood had a very few blossoms. It was chilly for so long.

Perky Sue? Isn't that an old rock 'n' roll song? No, that was "Peggy Sue," as first performed by Buddy Holly — video here. (Supposedly its name commemorates this  Texas lady.)

Its botanical name is Tetraneuris Ivesiana.  Photographed at Trinidad Lake State Park on the first of June.
Posted by Chas S. Clifton at 4:54 PM

Today I walked up the road to the switchback and enjoyed the wildflowers. Wendy had a good time as well.