Back through the Hayman Burn 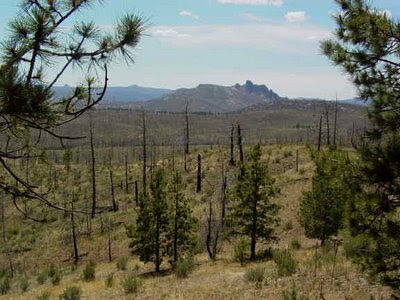 Looking south across the Hayman Burn with Sheep Nose in the distance, July 2008.

In January 2003, just before my father's death, he and I went up to look at the Hayman Fire site, where 138,000 acres had burned the previous June, turning most of the South Platte Ranger District on the Pike National Forest into habitat for woodpeckers and other cavity nesters.

We started up the Matukat Road, near where the fire started, but encountered a locked gate, no doubt to keep out sightseers like us. When he was on the Pike NF staff, Dad had the master key that unlocked every gate. I found it a couple of weeks later in his jewelry box, and I wondered if it still would work, twenty-plus years after he retired.

I did my own bit of "destruction tourism" in June 2003, driving from Wellington Lake to Deckers via Stoney Pass. Except in some canyons, the land was flayed of trees, and there were vistas that probably had not been available in centuries or millennia.

I did not re-visit the burn until last Sunday, making the same drive with M. from Wellington Lake but continuing south on the Matukat. Trees that can grow from their roots, such as willows along the creeks or aspens higher up, are recovering -- there are a lot of head-high aspen groves. Other trees take longer.

Goose Creek Campground, for instance, which I always remembered as being at the bottom of a deep, dark canyon, is now a green sliver, an oasis among treeless ridges. I see that the Forest Service, always wanting to remove developed campgrounds, considered closing it five years ago. It's a good thing that they did not, because it was full of campers. (They did close Molly Gulch CG, another victory for the bean-counters.)

Perhaps in 20 years people from Colorado Springs will drive their (high-clearance) electric cars along the Matukat Road to see the fall aspen colors.

On a high ridge we met a Forest Service employee changing a tire on his agency pickup and bitching about Dodge trucks in general. Since both the truck and his T-shirt said FIRE on them, we stopped to chat about a little smoke we had seen earlier in our drive.

He knew all about it -- and three or four others -- and he pointed to a big column of smoke that we had not seen because it was behind us: the expanding Oxyoke Fire.

I have to admit that my first thought to myself was, "Do you mean there is something left to burn?"
Posted by Chas S. Clifton at 3:31 PM