The FLDS Come to Live Among Us 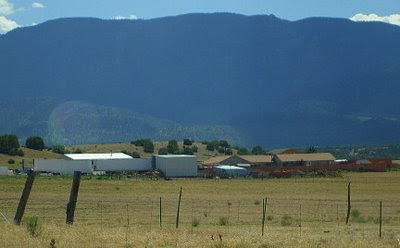 Last May, the local weekly reacted predictably when the editor learned that the Fundamentalist Church of Jesus Christ of Latter-day Saints had established compounds in Fremont and Custer County. (That is a Fremont County example above.)

The Custer County sheriff searched one FLDS compound for zoning violations, and of course he found some. Secretive religious groups always violate zoning regulations: obedient to to a higher power, they don't have to show you any stinkin' permits.

Anti-polygamists arrived to make their case by screening Banking on Heaven: Inside Warren Jeffs' Polygamous Cult. A former colleague of mine watched and was impressed.

There is not much sympathy for the FLDS here, but a journalist friend tells me that the sheriff's move was not well-received by everyone either.

It's the legacy of Waco and Eldorado. At Waco, the Branch Davidians were shot and burned for the crime of ... what was it exactly?

The FLDS "ranch" at Eldorado, Texas, was raided and women and kids hauled away, based on one telephone call that was probably bogus. I predict that the legal dust will take a long time to settle there.

So right now the local FLDS enjoy some sympathy for having been the victims of governmental jack-booted thuggery. But that could change.

Some complain that the FLDS spend no money locally. A bigger problem would be if they were seen to be block-voting in local elections.

Don't forget that that is what made Joe Smith unpopular in 1840s Illinois. He was offering the block Mormon vote to state politicians in return for granting him favors, such as being able to charter his own bank. He ended up murdered by a mob, after being arrested for destroying the office of a critical newspaper.

I have a funny feeling that the FLDS are more his spiritual heirs in some respects than are the mainstream Mormons.

UPDATE It was amusing to note that it took less than two hours after posting this item to get a hit from the FLDS stronghold of Colorado City, Ariz.
Posted by Chas S. Clifton at 3:25 PM

It's the legacy of Waco and Eldorado. At Waco, the Branch Davidians were shot and burned for the crime of ... what was it exactly?

The ATF had heard that the Branch Davidians had been trading in guns, that they had a lot of them, and that there was a lot of target practice at the compound.

So obviously, the only solution was a paramilitary raid with 75+ agents and three Blackhawk helicopters to "inspect" the guns. The shooting started after Koresh slammed the door on them.

I know that you know that I was being ironic in posing that question, and I know that irony pervades your comment. But there are people out there who think that owning large numbers of guns automatically makes you an enemy of the state.

I remember a mild-mannered Methodist minister from Denver -- a political and theological liberal --flipping into red-faced rage shortly after the Waco siege, shouting, "They deserved to die!"

There is a branch of the FLDS here in a city called Bountiful, BC. Some of their kids were taken in that raid. It was sad what happened in Waco and I can see it happening again given the events of 911. Anyone's whose beliefs differ from the norm is look at with great suspicion, so much for freedom of religion huh?

I know, which is why the comment steeps in special extra-bitter irony.

Seriously, in a milder context it's the only thing that explains laws regarding how many guns you can buy in a given period. So... you can't... set up an impulse militia?

That, and why "stockpile" always seems to be substituted for "collection"...

You should see the Florence CO compound now it is being took apart and sold by a squatter. He's selling the 50lb. Bags of red wheat for $2.a bag. He's even sold the church building. He said the underground bunker is 3 story's down and completely stocked