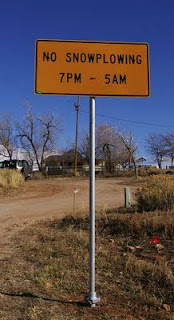 Due to a lack of money, the Colorado Dept. of Transportation has stopped plowing the road from here to Pueblo at night.

M. shudders every time that she sees the sign, remembering many late-night drives home after teaching a night class at the university. (I did that too, but for just one or two semesters.)

Early-spring snowstorms can be as heavy as you ever saw, a white wall of flakes, so that you wonder where the road is.

More than one night she passed only one other vehicle, a truck with running lights bearing towards her at the foot of Jackson Hill.

Who was out in that weather? None other than the local Schwan's delivery driver. The frozen pot roast and ice cream will go through!

"Neither rain nor hail nor sleet nor snow nor heat of day nor dark of night shall keep this carrier from the swift completion of his appointed rounds."

And here you thought that quotation referred to the Postal Service.

A student of mine had once driven a Schwan's route south out of Lamar into far southeastern Colorado, El Cuartelejo, the deep dark heart of the Southern Plains.

He claimed to have spent more than one night in his truck, snowed-in or stuck in some ditch or arroyo. But he had lots to eat.
Posted by Chas S. Clifton at 8:26 PM