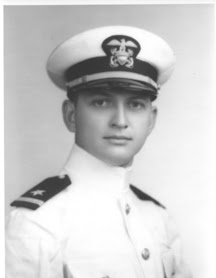 William Bailey was a Navy reservist when the United States entered World War 2. A college graduate (University of Kansas) employed by a large insurance firm, he was headed for intelligence work when he was first called up, but somehow ended up in the little-known Navy Armed Guard, commanding a detachment on the freighter SS Wichita.

I don't know if that switch was a Navy decision, or if someone told him that by changing over, he could get to the war sooner.

Since WW2 German submarines often attacked unarmed targets on the surface rather than submerged, the idea was that a four-inch deck gun on a merchant ship could hold them off. Sometimes it worked. It did not work for the SS Wichita in September 1942.  Ensign Bailey and his (probably) green crew of gunners were outmatched by Gerhard Wiebe, skipper of U-516.

The Wichita was lost with all hands.

William Bailey was my stepmom's first husband. They were married for six months. When settling her estate, I found all the papers, etc., that she had saved, including correspondence from her struggle to collect on his life insurance. Because he was lost at sea, the government would not declare him officially dead until the war ended in 1945, so she did not get the money when she really needed it.

I wrote a little piece about them for  the Armed Guard website. They had no children, but if he has any relatives surviving, I would be happy to hand over everything to them.

Email ThisBlogThis!Share to TwitterShare to FacebookShare to Pinterest
Labels: family

Chas, Di you know that my former father-in-law, Bob Cruzen was on one of those merchant ship gun crews? His ship was also sunk but there was apparently a lot of fire before the ship went down and he would have nightmares about being trapped by fire.

Galen, no, I don't remember that about Bob Cruzen. He was lucky to escape.

That's really interesting. I have a grandpa name William Bailey that was on a boat for the Navy during WWII. Not sure what boat he was on.