A Camera-Trapping Trophy, But Blurry

Continuing the narrative that started here and was continued here.

Some other animals came to the spring in late May, before it dried up.There was this red fox and two kits —the one at left is drinking.
A wild turkey passed by the camera.
Even a domestic dog —I suspect that it came up by an easier route than we do, from a small horse ranch about half a mile away. To reach the bowl from that ranch is easier than the route we must follow.

Once when I was hunting up there a few years ago, I saw a black-and-white farm collie trotting purposefully down in the direction of that ranch.

And then there was this one, early in the morning on May 20th. If only it had slowed down a little for a sharper image! 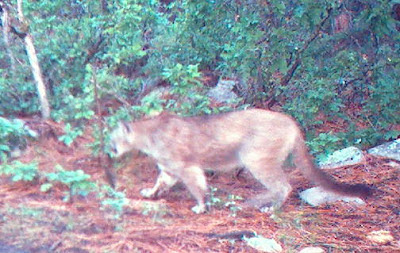 I have always figured that to catch a mountain lion with the scout camera was a sort of Holy Grail. Now I will have to adjust my goal to a good image of a mountain lion — or else Holy Grail #2, which is a ringtail.
Posted by Chas S. Clifton at 1:00 AM

I had no idea a creature such as the ringtail exists in Colorado.

Nice catch, Chas, congrats! Darrell, I don't know about most of Colorado, but I've seen them up in Dinosaur National Monument, on the Utah border and almost in Wyoming, so they range pretty far and wide.

Darrell, to be honest, I have not seen a ringtail myself around here, but reliable friends have spotted them in Fremont and Custer counties. They are nocturnal and usually solitary.

That was a good haul, Chas. The ringtail should show one of these days too. As for the Austrian flagrante footage, had Silvio Berlusconi been the subject, he would have considered it a worthy feat.