Brome Grass and Bear Shit — Thinking about this Summer


The Liatris are starting to bloom, which marks beginning of Late Summer here in the foothills. Funny thing, with last spring having been so wet, I expected a wildflower explosion. And the summer has been fairly rainy, although with a hot and dry period in July.

Nope. Where are the wild geraniums? Golden banner? Where are [fill in the blank]? Some asters, vetches, locoweed, yarrow . . .  they showed up.

At higher altitudes, there is much more profusion. We must have been in some kind of  meteorlogical "doughnut hole" again.

Instead, early summer turned into March of the Brome Grass.  There have been patches of it here and there, but something — presumably the extra moisture — really threw its switch this year.

Fun fact: Smooth brome was imported from Hungary in 1884. Some consider it invasive, but the ranchers seem to like it. Not like cheatgrass, in other words, which is a brome too but which is evil.

What are some alternatives? The Minnesota Department of Natural Resources suggested these natives:
I tried my own line-up this year with plants bought from Hartungs' Desert Canyon Farm in Cañon City, one plant each of Indian ricegrass, Achnatherum hymenoides; big (giant) sacaton, Sporobolus wrightii; and silver spike grass, Achnatherum calamagrostis. 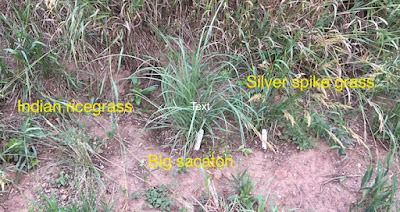 These are my three test plants. They are hard to see, but all are doing well. Now it's a matter of harvesting seed. 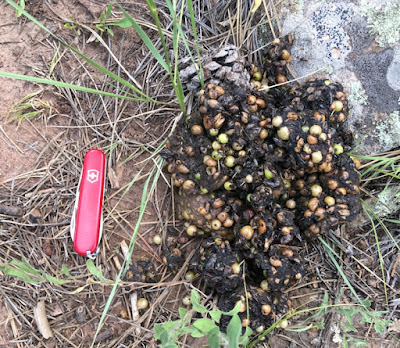 A black bear left this little calling card near the house on July 24th. Fisher the dog had been on alert that night — rushing out onto the veranda barking, then into the back dog run barking — he knew Somebody was out there. 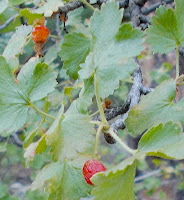 It looked like the bear had eaten some immature currants, but I don't know how much nutritional value it extracted. One bush not far from the site was pretty well stripped. I ate on currant for form's sake the next morning, out of a sense of brotherhood with the bears, who taught the peoples what to eat.

That was Early Summer. Now it is Late Summer, mushroom season. More to come about all that.

we had a fairly (but not especially extreme) cool and very wet spring/early summer here, and EVERYTHING is behind, flower wise. I have plants that are normally in full bloom by now that are barely showing buds.