Driving Around Looking for a Farmers Market

A few years ago, we had a membership in a CSA farm on "the mesa" outside Pueblo. In the summers, we planned our weekly shopping/library trip to coincide with the day when we could harvest or pick up our fruits and vegetables.

Then "our farmer" had some life changes and closed his operation, scattering his interns to the Colorado winds.

Vegetable gardening here in the foothills is a tricky operation, so for more volume and variety, we relied on farmers markets.

Only most of them that we see are only about 10-percent fresh food to begin with. The rest are selling crafts, preserved foods (jellies, etc.), burgers, brats, tamales, homemade soap, CBD products, house plants, fabric thingies, wooden thingies, adoptable dogs . . . you name it. 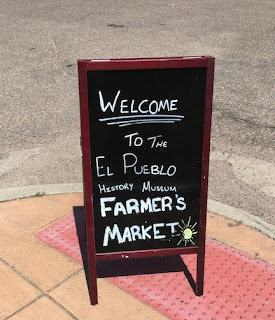 We made a circuit of four or five markets in a three-county area but more or less settled on the Saturday market at El Pueblo History Museum. In June the Pueblo Chieftain proclaimed,


The grounds of El Pueblo History Museum will soon be inundated with farm-fresh produce, crafts made by local artists, popular Pueblo food trucks, and countless other locally made goods as the museum gears up for the annual El Pueblo Farmers Market.

"Inundated" is not the word I would use. Yes, there were food trucks, but some food vendors that had been there last year had disappeared. One organic-grower couple whom we called "the Ravens" were back, but with less than usual. On our first visit, the third week of June, we bought some veggies from them and from Arkansas Valley Organic Growers. AVOG's radishes were too woody to slice, and their mushrooms were about a day away from rotten.

M's very favorite grower was not there that day or subsequently. Meanwhile, the museum's market day had shifted from Saturday to Friday, putting them in head-to-head competition with another one in town. In an editorial titled "Dueling Farmers Markets," the Chieftain noted,


Obviously, it will be tougher for shoppers who work regular weekday schedules to make it to either market, unless they can find time on their lunch hours. Trying to spend any significant amount of time browsing at both markets on a lunch hour would pose a significant challenge. . . .  it seems logical that at least some of the vendors would like to hedge their bets by selling at both markets. For small mom-and-pop operations, that will be difficult, if not impossible, with the conflicting dates and times.

In Fremont County, the Thursday market in Florence seemed sparser than ever in terms of actual food. One significant organic grower had dropped out two years ago for unspecified reasons, while another, smaller operator decided that he was better off selling from his own farmstand two days a week.

In Custer County, the Westcliffe farmers market was the healthiest of the bunch, in terms of producers' offerings, which (being Westcliffe) included local grass-fed beef and too-sweet Amish cakes and breads. My favorite tamale vendor was there too.The county's population triples when the summer people arrive, and there is a distinct vibe of said summer people wanting to shop there in order to participate in local culture. (I have no problem with that.)

Also, there is live music, although you have to wonder if "I Am a Man of Constant Sorrow" is music for food-shopping.

M. and I weighed the reasons why we visit these different towns, and in the end, we started planning some errands so that we could visit the farmstand. No more chasing the perfect farmers market.

But I still need to buy and freeze more tamales.
Posted by Chas S. Clifton at 7:34 PM

More and more farmers markets here are switching to a weekday schedule too. And not just a weekday schedule, but a mid-day schedule. I could get it if it was something like a 4pm-8pm schedule, to catch the folks on their way home from work, but it tends to be a 10-2 sort of thing. Which means that their attendance is probly going to drop off. Which is....frustrating.