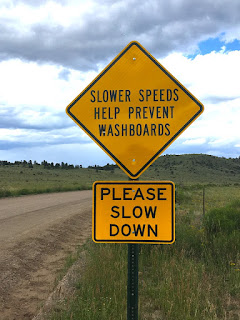 The county Road and Bridge department put this up on the road that I travel now and then. I appreciate what they are trying to do — in a county full of gravel roads, maintaining them is a constant job.

Today I noticed that the road up to our mushrooming grounds had gotten noticeably rougher in just a week, to where if I don't slow down, the lightweight Jeep Wrangler will want to start dancing sideways.

So what is going on? Some physicists worked on the issue:


Just about any road with a loose surface — sand or gravel or snow— develops ripples that make driving a very shaky experience. Physicists have recreated this "washboard" phenomenon in the lab with surprising results: ripples appear even when the springy suspension of the car and the rolling shape of the wheel are eliminated. The discovery may smooth the way to designing improved suspension systems that eliminate the bumpy ride. . . .

"The hopping of the wheel over the ripples turns out to be mathematically similar to skipping a stone over water," says University of Toronto physicist, Stephen Morris, a member of the research team.

"To understand the washboard road effect, we tried to find the simplest instance of it," he explains. "We built lab experiments in which we replaced the wheel with a suspension rolling over a road with a simple inclined plow blade, without any spring or suspension, dragging over a bed of dry sand. Ripples appear when the plow moves above a certain threshold speed."

At Midwest Industrial Supply, which sells dust-control and soil-stabilization products to counties like ours, they note that


Protracted periods of dry weather can also lead to washboarding, as arid conditions cause the crust that forms on the surface of gravel roads to loosen and become more susceptible to reshaping by passing tires. Conversely, if a gravel road doesn’t have the appropriate crowned road profile, water won’t be able to drain properly. Water will then accumulate in depressions and ripples in the road, which will in turn be deepened by passing traffic.

That "certain threshold speed" is about 3–5 mph, depending who you ask, and speed does make the washboarding process worse.

All this raises another question in my mind. Did horse-drawn carriages and wagons create washboard surfaces too? (I expect that their narrow wheels mostly left ruts, but I do not know for sure.) And if so, did the advent of washboarding lead the old-timers to cuss those newfangled motorcars for ruining the roads?
Posted by Chas S. Clifton at 9:20 PM