How Can You Be Neutral in the Chile Wars?


In August 2018 the state of Colorado announced an addition to its growing collection of specialty license plates — the Pueblo chile plate.

After months of working to get the famous pepper to appear on a Colorado specialty license plate, Pueblo farmers, the Visit Pueblo Convention and Visitors Bureau, Pueblo Chile Growers Association and Greater Pueblo Chamber of Commerce celebrated its availability at the steps of the Pueblo County Courthouse Monday morning.

“This is a great thing for the Pueblo Chile. People in Colorado want to be a part of it,” said Dalton Milberger, president of Pueblo Chile Growers Association and of Milberger Farms in Pueblo County. . . . Former Pueblo County Commissioner Liane “Buffie” McFadyen, who helped Esgar kick off the idea for the license plates, said the plate represents another part of brand layering to increase Pueblo Chile’s market share competing with the rivals from New Mexico.

The Empire, however, had made a preemptive strike. New Mexico's 2017 chile pepper license plate was already winning awards in 2018.

Gov. Susana Martinez said she was proud to accept the award.

“Chile plays a significant role in our state’s culture and is one of our greatest treasures," she said. "This license plate lets the world know that New Mexico is — without a doubt — the Chile Capital of the World.” 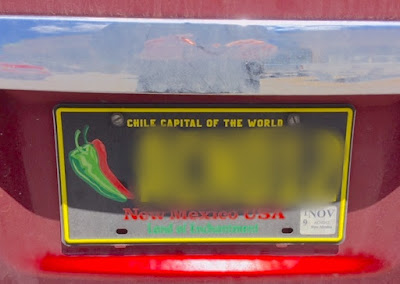 In a bid to become the Princess Leia of the Pueblo Chile Rebel Alliance, Colorado State Representative Daneya Esgar (D-Pueblo) announced in February 2019 that she had gotten a tattoo of a Pueblo chile pepper with the words "Death Before Hatch." 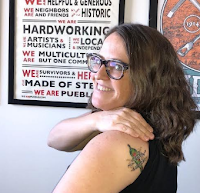 I would put the Pueblo chile plates on my Jeep, but I admit to some fear. I am in New Mexico two or three or four times a year. Would I face road rage from Hatch Empire loyalists? Would pickup truckloads of Hatch Stormtroopers blast me with their pepper cannons? Should I risk it? Maybe I should stick with the generic "greenie" plate.

Meanwhile, our Mirasol peppers are getting hotter. Last year (2018), dry weather kicked up the hotness of Pueblo chiles, this expert says:

“I don’t know if we have any scientific evidence to validate that peppers are getting hotter," said Dr. Bartolo. "But certainly with hot dry conditions we experienced earlier in the summer, it wouldn’t be too surprising if that was the case. Especially if they were water stressed."

Not everyone in Pueblo is in agreement on whether the new crop's heat has increased. Pueblo chile pepper growers, like Kasey Hund with DiTomaso farms, says the pepper's level of spiciness is noticeable.

The power of the Pueblo Alliance continues to grow. And there is a long-range plan at work here — I blogged about it in 2007: "Chile Peppers and Pueblo's Identity."
Posted by Chas S. Clifton at 5:05 PM No comments:

On the Road: The Kudzu of the Coast

Of the invasive plants in my country, I think that tamarisk and cheatgrass are the worst.

On the recent train trip to California, I saw stands of tamarisk that looked mostly defoliated along the Colorado River downstream from Dotsero. Maybe the beetles are starting to have an effect.

California has its own problems with invasive species — Scotch broom was one that I knew about.

The Monterey Peninsula, where M. and I were staying, offers every kind of succulent from everywhere (particularly southern Africa). It reminded me of places that I have visited in southern England, where the horticultural spoils of empire adorn thousands of suburban gardens.
There ice plant is the villain. Like kudzu in the South, it was introduced partly for erosion control on highway cut banks and such — and it controlled and controlled until it had driven everything else away and formed big solid monocultural mats.
At least it comes up easier than kudzu.
Posted by Chas S. Clifton at 2:34 PM 2 comments:

On The Road: M's New Villa


We walked by this house a number of times in the past few days. It's a little bit Tuscan villa, a little bit Arts & Crafts.  Some touches, such as the rounded ends of exposed beams, have a Green & Green vibe. M. was ready to pick it up and bring it home. 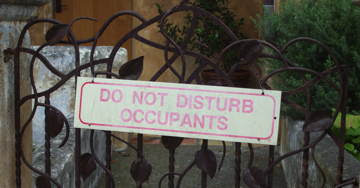 Obviously the residents are tired of architecture fans. 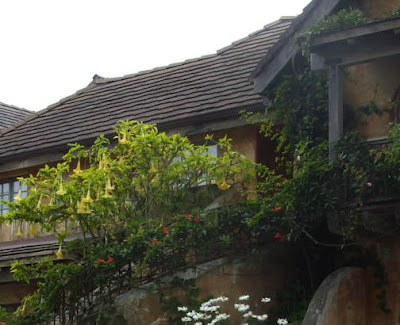 But another big draw for me was this huge Brugmansia, also known as "tree Datura," thriving in that mild climate.

The house is on Lighthouse Avenue in Pacific Grove, California, uphill from the downtown business district, should you happen to be in the neighborhood.
Posted by Chas S. Clifton at 8:13 PM No comments:

Email ThisBlogThis!Share to TwitterShare to FacebookShare to Pinterest
Labels: California, horticulture, plants
Older Posts Home
Subscribe to: Posts (Atom)
"The point was no longer to show one's hardihood. The point was to be there."