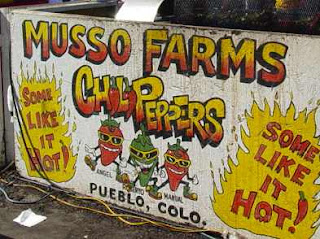 "Mdmnm" at Sometimes Far Afield commented on my "locavore" posting. He feared that I was missing out on chile peppers from Española, New Mexico.

In fact, Pueblo, Colorado is producing lots of chile peppers too, so they would be covered in my 100-mile radius.

But nothing happens by accident.

Consider the thesis of a paper written by Terrence W. Haverluk, geography professor at the US Air Force Academy, "Chile Peppers and Identity Construction in Pueblo, Colorado" (PDF download).

Many US cities are reinterpreting and reintegrating local foods and local geography to create new identities. Pueblo, Colorado, for example, is attempting to change its image from a gritty, working class, steel town to a postmodern, heritage tourism destination. Pueblo elites (chamber of commerce, merchants, landowners) have created new economic, agricultural, political, and ideological structures in an attempt to replace aspects of the previous social order. Ideology plays a mediating role between actors and structures—people both produce and are products of ideology. One way in which ideology is physically expressed is through symbols. The changing symbolization of chile peppers (chiles) is therefore both
product and producer of changing social structures.

There is a reason that the Pueblo Chamber of Commerce commissioned its own brand of bottled salsa picante a few years ago.
Posted by Chas S. Clifton at 1:04 PM

Glad to hear that you all aren't deprived. My assumption that you were without local chile was based on driving through southern Colorado and seeing folks along side the roads selling sacks of "genuine Hatch green chile". If Pueblo is successful, maybe we'll see folks coming down to NM with "genuine Pueblo green chile" in a few years.