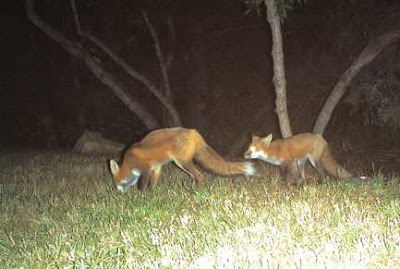 Three nights after my earlier fox photo, the scout camera captured this pair.

Mating season is still months away, but given the difference in size, I wonder if this is a bonded pair. But I know little about the pair bond in foxes beyond what I read here--that a male and one or two females may share a territory.

Lewis and Clark were somewhat confused by red foxes in the West. I am not sure why CSU says they are not in southeastern Colorado: I have seen them there, but it was on cropland, not grassland or canyon country.

Actually, if there is one elusive, nocturnal animal that I would like to photograph, it is the ringtail. I think they are here, but not in large numbers.
Posted by Chas S. Clifton at 2:30 PM