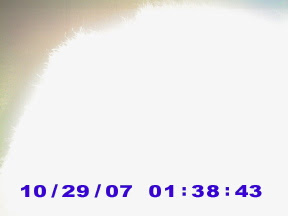 Early this morning--shortly after 1 a.m., M. says--she is a light sleeper and will wake up when a mosquito sneezes--the dogs erupted.

It's the way that they react when a bear is near the house, although this time, unlike a week ago, we did not shine a flashlight out the window and illuminate Mrs. or Mr. Bruin standing there next to the rainwater tank.

Today I went over to the guest house, where the motion-activated camera had been set up on the back stoop. I found it knocked over. At least it was not twenty feet away and in pieces. Only one species generally smacks things as a way of investigating them.

So is this fuzzy white image a very over-exposed black bear, shortly before he or she clobbered the camera?

Maybe I need to rig the camera up higher somewhere.

(There were six other shots in the camera--the usual foxes.)

In answer to your question,"It looks like it to me". Might wanna dim your flash, if possible, and strap that camera on tight so Bruin can't eat it. They seem to get cranky about the flash. Nice fox shots, and good luck.

I think it's a polar bear

CTC: My camera is one of the cheap models designed to be strapped to a tree trunk. I can't modulate the flash: it overexposes anything closer than about ten feet away. So the solution will be to find a different mounting point, I think.

Thanks for your thoughts.

You had better tell the USFWS that they have come to southern Colorado. I blame global warming.

They'll be hanging out on the ice floes on Pueblo Reservoir!