Above: lodgepole pine forests filling in after the 1988 Yellowstone fires.

My recent trip to Yellowstone came at the 20th anniversary of the big forest fires of 1988, which burned about a third of the park. The last time I had been there, recovery was just beginning. Fishing on the Lamar River, I had stepped from one winter-kill elk skeleton to the next.

It's all different now. There are lots of elk -- and the lodgepole pine forests are all 8-20 feet high.

In the current issue of the Rocky Mountain Elk Foundation's magazine, Bugle, writer Lee Lamb reviews the factors that produced this complex of huge fires (sorry, no link yet), their effects on wildlife, and what happened since.

Immediately after the fires, the nutritional value of annual plants exploded, but then influx of new nutrients slowed. The park's northern elk herd — really too many animals for the habitat — numbered at least 19,000 before the fire. At least half died in 1988-89. The population rebounded, although the introduction of wolves in the mid-1990s, plus hunting when the elk are outside the park, keep the northern herd's population to 8,000-10,000 animals now.

The lodgepole pine forests are coming back, of course. Lamb speaks of more aspen groves in the park—frankly, I did not see them. In fact, I was surprised at how little aspen there was. Unlike here in the southern Rockies, where aspen springs up after a fire, lodgepole is mostly replaced by more lodgep 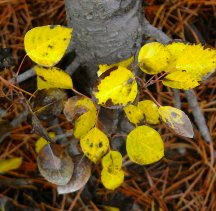 Even-aged stands of lodgepole pine are sometimes called "the green desert," because they permit few other plants and shrubs to grow and provide little food for wildlife other than squirrels.

Right: a tiny aspen crowded out by lodgepole.
M. says she prefers the northern parts of the park--Hayden Valley, Lamar Valley, Mammoth Hot Springs--best, and I tend to agree. Lodgepole pine forests are fairly boring, unless they have geysers and mud pots bubbling up in them.
Posted by Chas S. Clifton at 7:47 PM

Your story here is really interesting for me to read; I've heard from a number of people who are a bit older than me, all of whom have stories from the Yellowstone fires. I work at the Arbor Day Foundation, and remember just last month having a conversation with our founder about the effect the fires had on the national psyche toward trees. This post really illustrates the long-term investment trees can be, as well as the natural wonder of a forest regenerating after devastating fire.