The Oddness of Mountain Bluebirds 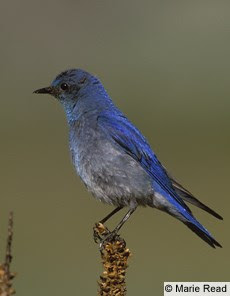 For the last week, I have been seeing little flocks of mountain bluebirds zipping back and forth where the prairie meets the foothills.

These small groups often mix in my memory with the snow squalls of spring, which leads to a question. If they are primarily insect eaters, what are they eating now? Cornell's page  says that they also eat small fruit, which around here would mean mainly juniper berries.

The little flocks are mostly males—or at least the males show up better. Getting a jump on territory-claiming?

Consider this, from Cornell's other site:

The Mountain Bluebird is probably the most aberrant of all thrushes. It nests in cavities, a habit shared by few other thrushes, and it lives in habitats far more open than those occupied by most other thrushes, including other bluebirds. It eats more insects than most other thrushes, has an unusually large degree of sexual dimorphism in its foraging behavior, and frequently hovers while foraging. In its behavioral ecology, in fact, it resembles not so much a thrush, or even other bluebirds, as it does a scaled-down version of an American Kestrel (Falco sparverius).

But that would be summer feeding, wouldn't it?
Posted by Chas S. Clifton at 6:00 PM

Interesting about the mountain bluebirds

Some Eastern bluebirds and a large flock (50+) of robins have been hanging out in our yard here in Minnesota for a couple of weeks now.

There are a lot of sources of fruit and berries here - but I've heard that robins will also fish in shallow water for minnows. The creek in our backyard runs fast so the water's open even in the coldest weather. I often see robins along the shore, but they're too far away for me to make out whether they're fishing or not.