Whatever Happened to Pickup Campers? 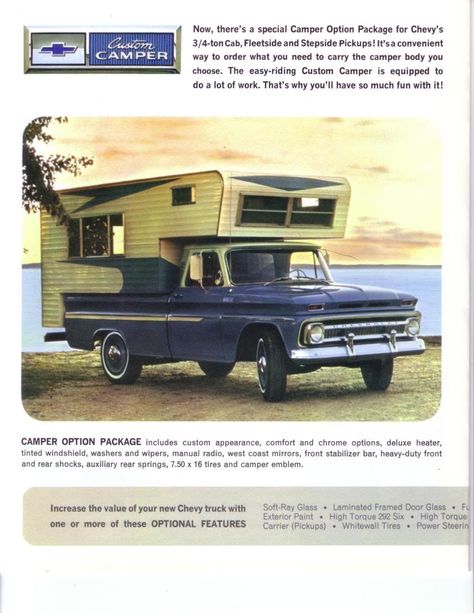 A couple of weeks ago, my friend R. and I were talking about trailers and RVs and such (maybe because he had recently gotten a new-used boat), and we both had the same question: When did pickup campers go away?

They were the inexpensive gateway to car-camping if you did not want to sleep in a tent due to weather or (conceivably) bears.

"And you could tow your boat behind it," R. pointed out.

We both remembered how when we were kids, a lot of the dads in the Boy Scout troop or whatever showed up with campers mounted on their 1960s or 1970s or maybe early 1980s pickups.

Sometimes the camper was slid out of the pickup bed in the off-season and left sitting on sawhorses in the side yard, while the pickup was used for other hauling or just as a daily driver.

Was this just another example of American Feature Creep? More and more gadgets, more and more dollars? Did Plain Jane pickup campers not offer enough profit margin compared to motorhomes and camping trailers? I suspect that they did not.

I still see a few, often with pop-tops, which helps with the wind resistance out on the highway, but nothing like during my childhood.
Posted by Chas S. Clifton at 5:03 PM

Oddly enough, I've been pondering this very question myself recently.

Indeed, so much so that I had a conversation with one of my kids a couple of weeks ago about it, and how there were people I knew who even had a pickup truck that they dedicated to this very purpose.

The conversation came about as we were discussing old pickup trucks. For various reasons, we have several pickup trucks here, the newest of which is twelve years old, and the oldest of which is 55. We're looking at replacing a 97 that my son drives, and probably because of the antiquity of some of the vehicles around here, he's been looking at older ones. That lead to a discussion of them, and indeed, to the discussion of a pickup that's of the very model depicted in your photograph above, i.e, a 2x4 "Camper Special" that my father owned in the late 60 through the mid 70s, even though we didn't have a camper ourselves.

Lots of people did, however, including one of my good grade school friends whose parents had a late 60s Dodge 4x4 that always had a camper in the bed. When they went fishing on the weekend locally, they took that, which was nice as it meant you could stop to have lunch in the camper during a day's fishing. Nobody would haul a trailer out for the day that way.

In our case, that's a spill over from the demise of the common use of the "sheep camp", although you can still get those. But that's not the case for everyone. Lots and lots of people have camp trailers right here in the neighborhood. And at least some people, like those in my household, call those trailers a "camper", even though they aren't.

What I think happened, in part, is that the expansion of the use of the truck killed them off. Back in the day, a lot of those trucks were really purpose dedicated. Those that weren't received some pretty heavy use. Our 2x4s, for example, were always on death's door by 60,000 miles. Most of them, up until the 70s, were standard transmission and somewhat heavy to drive, and most of them were driven by men as a rule. Even now, in my rural area to the north of you, my wife finds it odd that there are men who don't have pickups. Anyhow, when pickups spread to being family trucksters, that meant you didn't want a camper in the bed all the time but you might very well like to haul a camp trailer.

Also, at least to the eye, the process of backing a camper into a pickup looks a bit dicey. It probably isn't, but it looks that way.

We never had a camper when I was a kid as my father used his pickup as a daily driver and we hauled stuff with it. My father figured if we were going to camp. . . we could sleep in the back of the truck or pitch a tent. I've had that attitude, plus a camp trailer, as an adult and haul stuff in my truck. . um trucks, all the time. I still do that if I'm hauling my camp trailer.

Well, those are my long winded theories.

But before I go, along these lines, another thing like this is the pickup stock racks for horses. When I was young, I'd see guys headed up to the hills after elk with two horses in the back of a pickup truck. I can't recall how long ago its been since I've seen that.

"my wife finds it odd that there are men who don't have pickups."

Ha. I feel the same way that in that I currently do not own a pickup, instead making do with a small SUV and a utility trailer.

Well a SUV is a truck of a type, or at least they used to be sort of regarded that way.

Heck, the legendary Jeep started off as something like "Truck, Utility. 1/4 ton."

They took _Travels with Charley_ out of the HS reading list. That's what happened.