Industrial Detritus of the Wet Mountains

The Wet Mountains are older than the Sangre de Cristo range. Unlike the Sangres, they were not glaciated the last time that ice was here. (Illustration courtesy of Prof. Wayne Anderson, University of Northern Iowa.)


Multiple episodes of glaciation and deglaciation occurred in the towering Sangre de Cristo Range during Pleistocene time. No glacial deposits have been recognized in the Wet Mountains, probably because they were too low in elevation for glacial ice to accumulate.

They do, however, grow trees well, particularly white fir and ponderosa pine. Serious logging began in the 1880s and continued through the "get the cut out" years of the Reagan Administration in the 1980s.

Here is a place I often visit, which appears to be the site of an early twentieth-century sawmill. Earlier mills tended to be at canyon mouths or a little ways up a canyon, whereas this one is higher on a mountain and was probably accessed by motorized transport rather than horse-drawn. 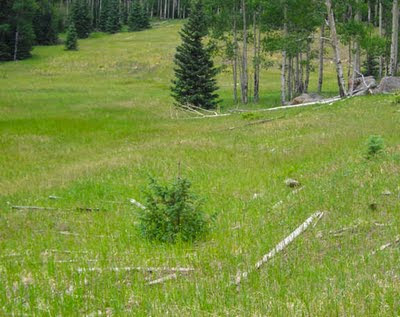 Scattered timbers on an artificial terrace mark the site of a narrow, rectangular building—the sawmill itself? 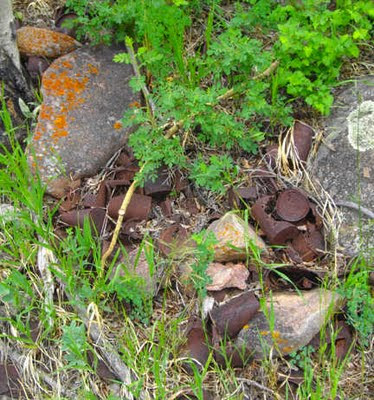 One of several can dumps. I noticed tobacco (e.g., Prince Albert) cans and condensed-milk cans among them. Many appear to have been opened expeditiously with a knife or screwdriver. 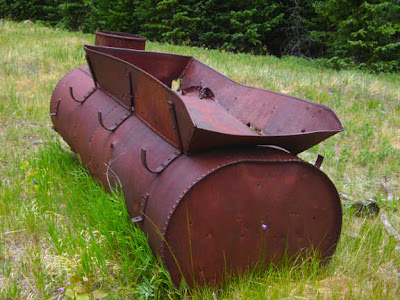 I first saw this rusty tank about twenty years ago and thought it was the boiler for a steam engine that presumably ran a saw mill. Now I am not so sure--it has no tubes inside and no fittings for water. Anyone have an idea? Some other sort of water tank? 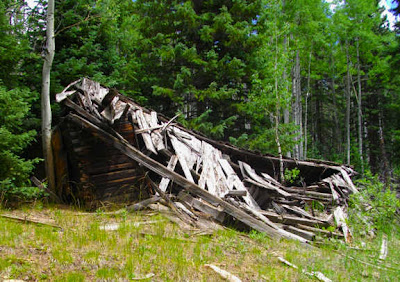 A more recognizable collapsed building—a bunkhouse? The roof is made from milled lumber, so as with the trash dumps, I tend to think it is early-twentieth century.
The site was evidently occupied for a while. There is no evidence of mining—this was outside the mining district that centered on Silver Cliff and Rosita.
Posted by Chas S. Clifton at 10:50 PM

Chas
Re the tank

Oh Oh Oh I love a detective story. What i'm wondering is the collar - it it perhaps a receptacle for fermenting the mash before distillery? With that collar an area for shovelling it in? Excellent mystery keep us posted
SBW

SBW: Actually, once when hunting near that spot I did encounter a deputy sheriff from a long-time local family (he was also hunting), and he told of stumbling across an abandoned still near there once. But I do not think that it was an operation of such magnitude.

Hmm so if not boiling a mash for alcohol, how about boiling up some kind of treatment for the wood?

Excellent post, I'm fighting the urge to spend the rest of the afternoon searching for clues

Regarding the cut open cans - do you suppose they used P-38's? I have one I got back in the 70's and it'll still rip a can open when I need it to.

I have a P-38 on my keyring, but I bet that those cans predated its introduction by the military.