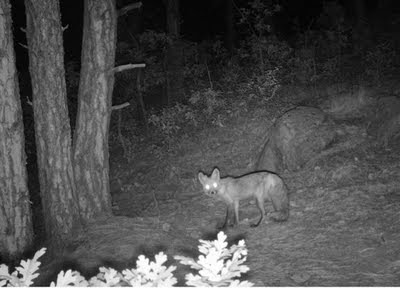 I mentioned how M. and I recently bought some land adjacent to ours that included a peculiar cabin, of which more later.

The owners made some noises about selling the furniture and appliances separately, but we just sat tight, and in the end they walked away from it all—leaving the beds still made, food in the cupboards (but not in the refrigerator, thank heaven), clothing in the dresser drawers, etc.

Taking some boxes of crackers and granola bars, some abandoned dry dog food, and some peanut butter and honey that we did not want, I decided to put it out in the woods—well away from any dwelling—and set up a camera.

The bears had been in the area—overturned basketball-sized rocks told the tale—so maybe they would find this bonanza.

But it was not the bears who came. Gray foxes got it all.

These photos were taken with the infrared flash, which also puts out red visible light. I like the second photo—the slow shutter makes it look as though one fox is dematerializing. (Click photo for slightly larger view.)

Since gray foxes are adept little omnivores, I expect that they enjoyed the granola bars, etc. and would have then gone on to looking for their next meals. This was a one-time feast that will not be repeated.
Posted by Chas S. Clifton at 10:16 AM

We have grays down along the rocks along the river (only about a qaurter mile away), but the reds seem to own my hill and they do not appear to overlap for some reason. The raccoons are less finicky!

Here they overlap, but the grays seem shyer near the house.